Establishment and operation of scientific research centre in the field of intelligent and secure information and communication systems is one of the main objectives of the project, which is co-funded by the EU, covered by The Agency of the Ministry of Education, Science, Research and Sport of the Slovak Republic for the Structural Funds of EU. Our partners in the project are Atos IT Solutions and Services, s.r.o. and the Slovak University of Technology in Bratislava.

The project is focused on fundamental research in the development of intelligent and secure information and communication systems in specific areas: Intelligent Network - Smart Grid, Security - Cryptography and Big data to create strong scientific basis which allows subsequent and after project research. 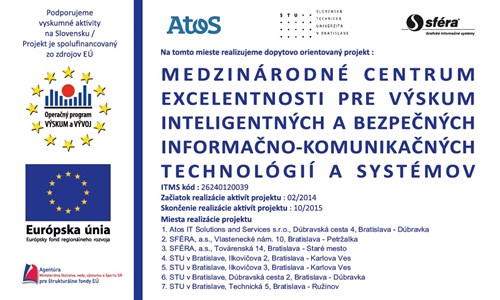 The ninth year of specialized energy conference ENERGOFÓRUM® -electricity was held on October 16-17 2014 at the hotel Sitno in Vyhne. The conference was under the auspices of the Ministry of Economy. The general partner was Slovenská elektrizačná pr...

The specialized energy conference ENERGOFÓRUM® was held on June 2014 at the hotel Sitno in Vyhne in cooperation with Slovak gas and oil association. As in the previous years, the participants and professional community hear interesting panel discuss...

Choose what you need from our products